With a view to better serve the implementation of national major strategy and the development of social economy, China has introduced new policies on work authorisations for foreign employees.

Before the formal implementation, in 2016 China had released the Pilot Implementation Plans for Foreigners' Work Authorization Policy (the “Plans”), which were restricted to 10 locations in China. On 1 April 2017, the new work authorization policy - Circular on the Implementation of Work Permit Service Guidelines for Foreigners in China (the "Guidelines") - issued by the State Administration of Foreign Expert Affairs (SAFEA) came into effect nationwide. The Guidelines provide further details and highlight the specific regulations of the Plan.

In comparison with the old policy, the Guidelines have introduced the following key changes: 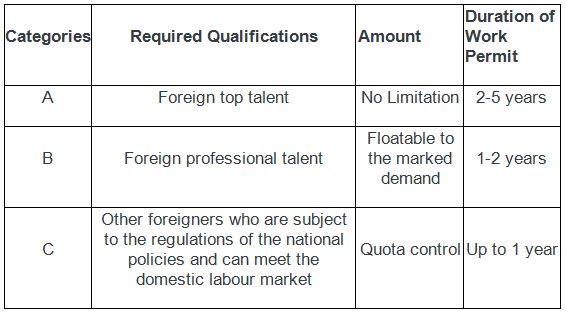 To encourage high-level talent from abroad, the Guidelines unveiled the following new polices and measures for those applying from Category A:

The general application procedures are as follows:

In order to attract overseas talent, China has also put significant effort into improving the permanent residency ("Green Card") System. In 2016, the Ministry of Public Security approved in total 1,576 foreigners in China for permanent residence; an increase of 163% over the last year. Some cities also conduct special policies to retain foreign talent. Shanghai, for example, has proposed the Shanghai "Green Card", which has been issued to 1,343 foreigners since May 2016.

In general, the requirements for such a “Green Card” are quite stringent. For foreigners to acquire permanent residency, the following paths are available:

The periods of time mentioned above refer to a successive duration up to the date of application.

Excluding the paths described above, some cities, for example Shanghai, issued local regulations and set up other paths to permanent residency, including: